Thwack! Yoon-hee put a hand up to her neck and felt something wet and sticky. She peeled it off. A spit ball. Yoon-hee felt her face flush as she lowered her body in her chair. She didn’t even have to turn around to know whose spit ball it was. Yoon-hee could hear them giggling—Lisa, Norma and Brittany always sat together at the back of Ms. Crabtree’s class.

She tried to focus her attention back on Ms. Crabtree. Her history teacher was pacing at the front of the classroom, talking about ancient Egyptian pyramids. Yoon-hee loved learning about ancient civilizations, and had even traveled to Egypt with her aunt once to see the pyramids up close. But her concentration was gone.

Every day in Ms. Crabtree’s class the three girls found a way to make Yoon-hee miserable. Last week, Norma had tripped Yoon-hee on her way back from the water fountain. Brittany had imitated her when she raised her hand to answer a question, behind her back. Why were those girls so mean? And why her? Yoon-hee wondered what it was about her that made her the perfect target. Maybe it was because she was quiet. Maybe they thought she would never stand up for herself. Maybe because she didn’t have a lot of friends at school to stand up for her when she was being bullied.

Out of the corner of her eye, Yoon-hee saw her classmate Gary trying to get her attention. She turned and he handed her a folded piece of paper with her name on the front, shrugging his shoulders and pointing toward the back of the room. Yoon-hee looked back cautiously. Lisa smiled sweetly and waved.

For a brief moment, Yoon-hee wondered if maybe Lisa was reaching out. She dreamed about being invited to a party, or asked to sit with Lisa, Norma, and Brittany at lunch. They would go shopping at the mall together and paint each other’s nails at sleepover parties. But as Yoon-hee opened the note, she immediately snapped out of her daydream.

Yoon-hee looked down at her shoes. They were old sneakers, hand-me-downs from her cousin. Her mom hadn’t been able to afford to buy her new shoes this year. Yoon-hee had seen the latest sneaker styles at Fancy Footwear, the shoe store where all the girls in town liked to shop. They were two hundred dollars. Yoon-hee couldn’t imagine wearing shoes that expensive, just to get them dirty in gym class. Her eyes filled with tears. Lisa and her friends weren’t reaching out at all. They were making fun of her. 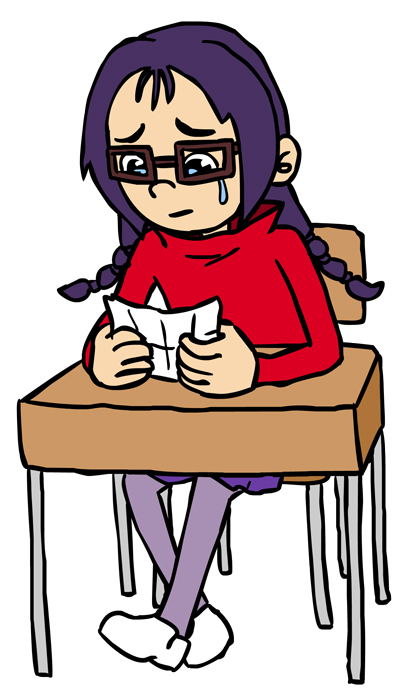 Another piece of folded paper landed on Yoon-hee’s desk, followed by more whispering and giggling. She grabbed the note and crumpled it into a tiny ball, shoving it deep into her coat pocket. Then she hurried out of the classroom before anyone could see her cry.

Locked inside a bathroom stall, Yoon-hee let the tears fall. She wished she could fall through a trap door in the ground and find herself in a secret world, like the characters in her favorite chapter books. She would have lots of friends in this fantasy world. No one would bully her for being different. Yoon-hee told herself not to read the second note. She tossed the note into the toilet and flushed it away.

The next week in history class, Ms. Crabtree stood at the front of the room and clapped her hands to get everyone’s attention.

“Boys and girls, we’re going to be starting an exciting new class project.” She smiled widely and waited for the noise to settle down. Yoon-hee opened up her notebook to take notes.

“I’m going to split you up into teams of two. Each team will be assigned a different ancient civilization. You and your teammate will pretend that you are visitors from your civilization and you will teach the class about your civilization’s culture.”

The class started to buzz with excitement, as Yoon-hee’s classmates started to claim partners for the project. Yoon-hee’s shoulders slumped. She didn’t know who would want to work with her.

“Ahem!” Ms. Crabtree shouted. “Before you rush around picking partners—I will be assigning your partners for this project. So listen up for your assignment.”

Everyone groaned, but Yoon-hee immediately breathed a sigh of relief. She would much rather be paired up than have to choose.

“Sam, you’ll be working with Gary on ancient Greece.” Sam and Gary smiled at one another.

“Yoon-hee, you’ll be with Brittany, and you two will be presenting on the Aztecs.”

Yoon-hee turned to look at Brittany. She saw Lisa whisper something to Brittany and so she quickly turned back around in her chair. Her heart sank. She couldn’t believe that she’d have to work side by side with one of her bullies.

When Ms. Crabtree finished assigning partners, everyone scraped back their chairs and spread out around the room with their teammates. Brittany and Yoon-hee walked over to a corner of the room and sat down, opening their textbooks to the pages covering the Aztecs. The two girls didn’t say much to each other. Instead, they read quietly in their books for several minutes. Brittany finally broke the silence. 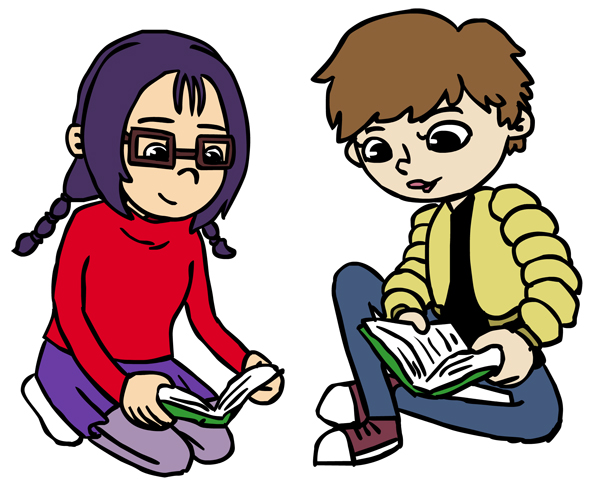 “It says here that the Aztecs were really big on human sacrifice,” Brittany said, pointing to a spot in her book. “They killed people for the gods.”

Yoon-hee nodded. “They also introduced the 365 day calendar. And I think they invented hot chocolate.”

Brittany smiled a small smile. “We should totally just give out hot chocolate to the whole class. We would definitely get an A.”

“And we can sacrifice one classmate to the gods,” Yoon-hee said with a laugh. Maybe this wouldn’t be so bad.

The girls continued to share ideas, and make jokes. They put a big piece of poster board on the floor and started to design a poster for their presentation. Yoon-hee sketched an Aztec symbol in the center of the poster.

“Wow, you are really good at drawing,” Brittany said with admiration. “My drawing looks like a five year old. You should definitely do the illustrations. I’ll write some of the text.”

An hour later, the bell rang. Both girls jumped. They were so in the zone, working hard on their project. Yoon-hee felt sad, like a spell had been broken. Once they walked out of Ms. Crabtree’s classroom, all of the talking and laughing from the past hour would probably vanish into thin area. Yoon-hee would go back to being a loner, and Brittany would go back to her giggling and whispering friends. Yoon-hee threw her backpack on her shoulder and headed for the hallway.

“Yoon-hee, wait up!” Yoon-hee turned and saw Brittany hurrying after her. She stopped and waited for Brittany to catch up. “Can we talk for a minute?”

Yoon-hee felt her body tense. Was Brittany going to make fun of her jacket or her cheap backpack? She folded her arms across her chest and waited.

“I know this isn’t going to mean that much… but I just wanted to say I’m really sorry.” Brittany looked down at the floor. It was the first time Yoon-hee had ever seen Brittany look uncomfortable.

“Sorry for what?” Yoon-hee said carefully.

“I just… I know that I have been really mean to you this year. Lisa and Norma, too. It’s not right. And today, when we worked together, I saw that…you’re really nice and a really cool person. And you don’t deserve that.

Yoon-hee was shocked. She hadn’t expected this. She took a deep breath.

“You guys have really hurt my feelings this year,” she said.

“I know,” Brittany said. She looked really upset. “I shouldn’t have gone along with it. I don’t expect you to forgive me now, but I just wanted to apologize.”

Yoon-hee looked at Brittany thoughtfully. She thought about how Brittany must have been really insecure to bully her just because her friends were doing it. Brittany was a foreign-exchange student from France and hadn’t known anyone when she first moved to Fliderdale. Yoon-hee remembered seeing her sitting alone at lunch and walking through the hallways by herself. She eventually became best friends with Norma, and then Lisa. But she had once been lost and trying hard to fit in, just like Yoon-hee.

“I think I can forgive you,” Yoon-hee said. “As long as you treat me like a friend from now on, I will try my best to start fresh.”

Brittany smiled. “Thanks for giving me a second chance,” she said. “Want to go get some hot chocolate? All of that Aztec talk is making me thirsty.”

Yoon-hee nodded. “Let’s go,” she said, and the two headed down the hall and out the school doors.

What's Right with this Picture? Open Me!

In this story, Yoon-hee finds the strength within herself to forgive someone who has hurt her in the past. Forgiveness is a lot harder than it looks—sometimes it feels easier to hold a grudge and stay mad at someone than to forgive their mistakes. Yoon-hee is even able to put herself in Brittany’s shoes to try to understand why Brittany is mean to her. That takes a lot of social intelligence and a lot of understanding. Yoon-hee comes out on top, as the bigger person. Plus, staying mad often makes us feel worse, because we hold on to negative feelings in our bodies and minds for a long time. While it might seem like forgiveness only helps the person we are forgiving, when we forgive, it actually helps us feel better too!

Brittany also shows some strength in this story. She may still have a long way to go in terms of earning back Yoon-hee’s trust and respect. And she definitely did some things that were not nice at all! But realizing we are wrong and then apologizing sincerely shows humility. She was able to admit that she did not do the right thing—and that’s the first step to building a new friendship with Yoon-hee.

Are you a teacher or parent teaching your kids about their strengths? Check out GoStrengths! new workbook, What’s Right with this Picture? 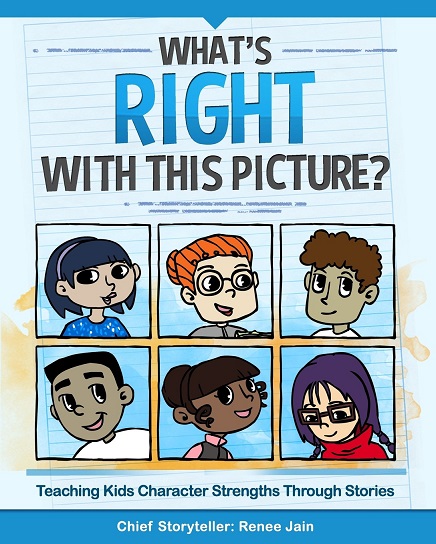