Stress has a story shaped by science, news and popular culture. Here’s the narrative in a nutshell: stress is bad, very bad; we should do everything in our power to live stress-free lives.

Unfortunately, the underlying story of stress is skewed. In fact, there is another body of research revealing that stress can actually enhance performance and well-being. Yes, there is something known as eustress or “good stress.” What’s fascinating is that introducing the idea that stress can work to one’s advantage is a more powerful antidote to its ills than jarring people with scary stats about its harmful effects. 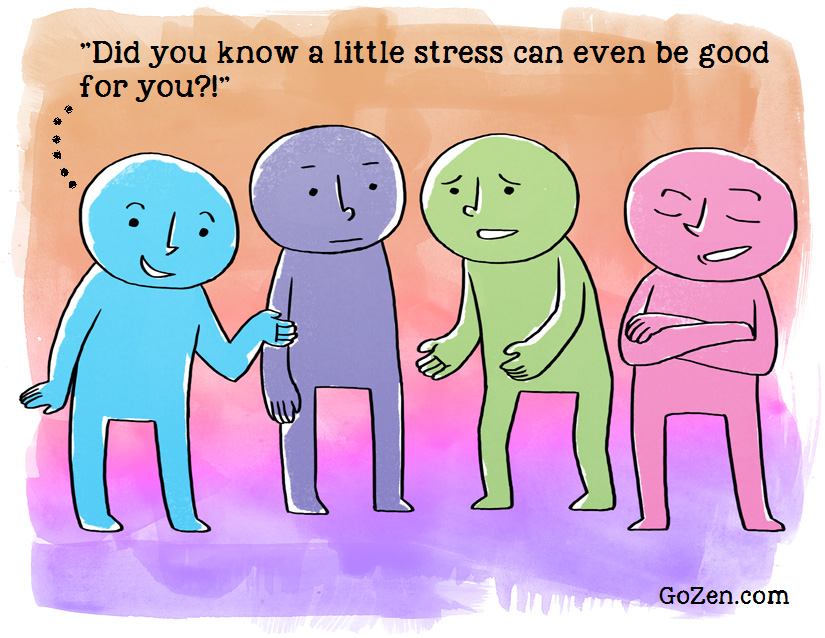 As parents, teachers, and concerned citizens, we want to take on the epidemic of childhood stress. We want to arm our children with tools to cope with challenges and increase well-being. So, let’s pause and recalibrate our approach. Instead of just focusing on the negative effects of stress, let’s tell a more holistic story: not all stress is bad. Some stress can even be used to your advantage. By understanding this, children avoid taking on the impossible mission of eliminating stress completely (and then feeling miserable when they can’t do it).

I propose we shift our goal from asking kids to stress less, to instead helping them stress better. Here are six ideas to do just that.

It’s our natural instinct to make children aware that they are potentially hurting themselves. But focusing solely on the harm caused by stress has two drawbacks. First, it indicates to kids that stress is bad in an absolute sense, which is simply untrue. Second, combating stress using fear tactics can create even more stress. It stands to reason that thoughts like “Oh no, I’m stressed, and stress is so bad,” are going to exacerbate the child’s worries. In other words, stress itself is stressful. And the research confirms this.

Recent studies by Yale and Harvard researchers reveal that corporate trainers who focused on the negative ramifications of stress increase stress in trainees. While this research was conducted on a business population, let’s extrapolate that the effect on kids might be the same. To stress better, children should understand the reality: a certain amount of stress is okay; it can even be good for you.

2. Introduce the Evolutionary Purpose of Stress

Kids of all ages love to know that stress has a purpose. Think about our ancestors who went out hunting and gathering food for their families. When attacked by a saber-toothed cat, chemicals were pumped into the body to help fight the predator or runaway. This evolutionary reaction to danger is known as the stress response — it’s a survival mechanism.

In modern times, we don’t typically need to flee from predators, but the stress response still has a purpose. A certain amount of stress can help us marshal the resources necessary to reach a goal. Studies even demonstrate that as stress increases, so too can performance.

There are two main types of stress: positive and negative. Positive stress even has a fancy scientific name: eustress. Most kids have experienced eustress. Ask them to think of a time when their heart was racing but there was no immediate threat or fear. Maybe it was while riding a roller coaster, watching a scary movie or going on a first date. That feeling is good stress!

Eustress can help boost motivation, focus and energy; create a feeling of excitement; and improve performance and decision making. It is generally short-term in nature. By contrast, negative stress, known as distress (or what we commonly just refer to as “stress”), can cause anxiety or concern, is often outside our coping capacities, can decrease performance and lead to mental and physical problems, and may be short- or long-term in nature.

4. Dig into the Researched Benefits of Stress

Lend these ideas credibility by citing recent science. Here’s a snapshot of some studies related to the benefits of stress:

● Stress can help the immune system. In one study out of the Stanford University School of Medicine, patients who demonstrated higher short-term stress before knee surgery recovered twice as fast as those who were not as stressed.

● Stress can improve memory and learning. According to neuroscientist Connor Liston out of Cornell, the stress hormone cortisol, in short bursts, can increase the brain’s openness to learning. In other studies, Michael Gass, Chair of the Kinesiology Department at the University of New Hampshire, has found that those who take physical risks like bungee jumping can process information far faster than control groups.

One of the simplest yet most powerful ways to stress better is to start with the right mindset. In a recent study, researchers out of Harvard and Yale conducted an experiment on two groups of stressed-out investment bankers.

The second group also reported less fatigue and fewer headaches and backaches associated with distress. The results of this study are significant: thinking about stress as “good” or performance-enhancing can work to your advantage.

For kids, this research can be applied immediately. For example, during test time, a pounding heart can be reframed by saying, “Hey, a little stress is actually helping me on this test–my body’s giving me a little burst of energy and extra focus to get through this.”

6. Exemplify How Distress Can Lead to Growth

Sally Walker was a survivor of an airline crash that killed 83 people. She said, “When I got home, the sky was brighter, I paid attention to the texture of the sidewalks. It was like being in a movie… Now, everything is a gift.”

In his memoir No Such Thing as a Bad Day, Hamilton Jordan noted, “After my first cancer, even the smallest joys in life took on special meaning — watching a beautiful sunset, a hug from my child, a laugh with Dorothy. That feeling has not diminished with time.”

What Sally and Hamilton were referring to is the idea that what doesn’t kill you can literally make you stronger — and the studies support this. Kids may be familiar with the term post-traumatic stress, but there is recent research out of the University of North Carolina on a phenomena called post-traumatic growth (PTG). PTG is the positive changes resulting from a major life crisis (or serious distress).

Researchers studied survivors of severe accidents such as brain injury and paralysis, people who have gone through divorce and even former prisoners of war. In all these situations, some come out stronger than before. PTG results in their feeling more connected with their friends and family, more resilient, and more grateful. Researchers found that those who tend to experience PTG usually approach difficulty rather than avoiding it; they are more open to change.

In our effort to stress better, let’s teach children that when they face challenges, it’s important to embrace their emotions rather than run away from them. When in a situation of distress, children can reference the examples above or a personal example highlighting where distress has led to positive change. These are reminders that something good — even great — can come from stressful times.