Seventh-grader Gabrielle Molina was found hanging by a belt in her parents’ house after mercilessly, repeatedly, being called a slut. Thirteen-year-old Asher Brown shot himself in the head after his bullies acted out homosexual acts to taunt him in gym class. Rebecca Ann Sedwick, 12, leapt to her death from the top of an abandoned concrete factory after relentless taunting in which she was told to “drink bleach and die.” Every other month there’s a national headline about a teen suicide resulting from bullying. And nearly 8 percent of high school students report having attempted suicide one or more times in the past year. 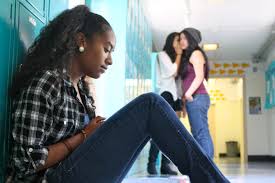 Being a tween or teen isn’t easy. Body issues intensify, emotions are exacerbated, and puberty makes everything feel dire and immediate. Bullying is an issue as old as teenage angst, but technology has morphed the nature of the problem. Taunts and teasing no longer linger in the schoolyard—social media posts, text messages, and inappropriate photos that go viral last forever. Teenagers who are bullied can no longer escape to their bedrooms when their cell phone is buzzing with incoming abuse. Electronic bullying is disseminated among massive groups of people, rather than staying contained within school cliques.

Suicide, of course, is a complex mental health issue. No research can prove a direct cause and effect relationship between bullying and teen suicide, but most experts recognize a connection. One review from the Yale School of Medicine found that “bullying victims were two to nine times more likely to report suicidal thoughts than other children were.” More than 40 percent of teens report having been the victim of cyberbullying, and nearly 60 percent of teens don’t think it’s a big deal. Yet parents and community members who live with the fallout of a teen suicide do think bullying is a big deal, and are implementing programs that attempt to curb it.

As of 2012 Montana was the only state that had not yet passed any anti-bullying legislation. Yet some studies have found that such laws may actually do little to deter a student from bullying. In an answer to ineffective laws, many schools across the country have initiated anti-bullying programs aimed at stopping the problem before it starts. And yet even these may not be a viable solution. One study found that students who attend school where there is an anti-bullying initiative in place are sometimes more likely to experience bullying than in schools where no such program exists.

Perhaps bullying prevention—especially in today’s changing school atmosphere—must come from changing our understanding of suicide and its relationship to bullying. Dr. Christine Moutier, medical director at the American Foundation for Suicide Prevention, told CNN that “as a society, not just the press, [we] need to handle suicides in a way that’s knowledgeable, that provides hope and real resources for people who are struggling.”

Instead of directly targeting the behavior of bullying, a reevaluation of general programming in schools could be the solution. Catherine Bradshaw, a Johns Hopkins developmental psychologist who studies bullying, told Discovery News that bullying “provides these kids with a sense of power. It’s a way of pulling your core group closer and putting someone else out of it.” Bullying, that is, is a social response to an emotional issue. What if a bullying prevention program directly targeted the social and emotional development of children? The answer to bullying could be a holistic developmental one, rather than one that which responds to specific behavior.

Social and emotional learning (SEL) programs aim to cultivate life skills that help kids manage emotions, achieve goals, and establish positive relationships. These same skills help kids learn to make responsible decisions and constructively overcome hardship. There’s not yet research that points to how SEL programs could eradicate bullying from schools, but there’s no doubt it could have an impact. Perhaps if the bullies who tormented Rebecca, Asher, and Gabby had been enrolled in SEL programs, their destructive behavior would’ve slowed. There could have been three fewer teen suicides this year. Perhaps 2014 is the time to explore this possibility.