Marisa wiped the sweat off her brow and jogged over to join the rest of her teammates in a group huddle. Their team captain, Allison, was speaking in a loud whisper, calling out different plays and trying to motivate her crew. The Fliderdale Hyenas were down 3-0 at the first soccer game of the season, and it was already halftime. They seriously needed to catch up. 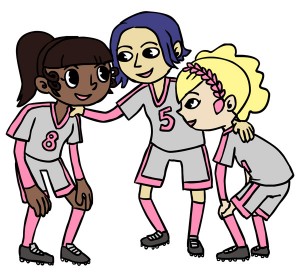 Marisa wasn’t the best soccer player, but she was a dependable member of the team. She always tried to make herself open, played defense with tons of enthusiasm, and cheered on her teammates from the benches. Marisa loved that feeling of belonging to something bigger than herself. She loved being just one part of a whole, a team of strong and athletic girls. Out of the field, she had her teammates’ backs no matter what. She just wished she could be more supportive of her soccer girls off the field.

Marisa’s twin sister Lisa loved making fun of the Fliderdale Hyenas girls’ soccer team. Lisa had decided that a lot of Marisa’s teammates were lame, because they were more into sports than makeup and didn’t really care about fashion. She would say things like, “How are the Fliderdale Fashion Nightmares?” when Marisa came home from practice, and would make faces when she saw Marisa’s teammates wearing baggy t-shirts and shorts.

Marisa thought Lisa was probably jealous. When Marisa had long practices after school, Lisa had to take the bus home alone and didn’t have anyone to talk to as she ate her snack and did homework. Also, Lisa wasn’t good at any organized sports, unless you counted speed shopping. But Marisa couldn’t help but feel hurt when Lisa and her friends joked about how uncool the Hyenas were.

Normally, Marisa would just roll her eyes and pretend it didn’t bother her.  But she never defended her teammates or told Lisa to stop insulting them. Marisa felt guilty for not standing up for her soccer friends and for caring about what other people thought. She felt especially guilty when Allison asked her to sit with the team at lunch and she made up some lame excuse, because she didn’t want Lisa and her girlfriends to see her eating with “uncool” kids. 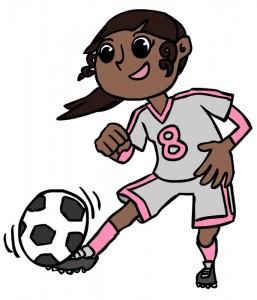 The soccer team spilled back out onto the field to face their rivals, the Wildcats, once more. The ground was muddy from a recent rainfall.  Everyone was slipping and sliding, and Marisa laughed as a shower of mud hit her legs. She got ahold of the ball and passed to Allison. Allison managed to maneuver the ball past a pack of Wildcats and scored! Yes! Marisa ran up and pulled Allison into a giant hug. Their teammates surrounded them, jumping up and down.  It was the best feeling in the world. She loved these girls.

After the game, Marisa headed toward the locker rooms with Chelsea and Lee, two girls on the team. They had lost, 4-2, but they were still proud of their comeback.  The team was planning to go out for ice cream to celebrate. As they were making their way through the grass, still muddy and sweaty and laughing about the game, Lisa and two friends rushed over to Marisa.

Marisa froze. Her soccer friends stood on either side of her.

“Um, I might have other plans,” Marisa said hesitantly. 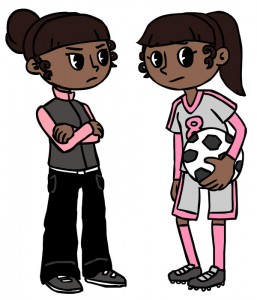 Lisa put a hand on her hip. “What do you mean?”

“I think… I’m going out for ice cream with the team.”

“So you’re ditching us for these girls?” Lisa said. The way she said these girls made it clear that she did not think they were cool. At all.

Marisa began to feel uncomfortable. She looked at Chelsea and Lee, who kept silent but looked upset. Marisa took a deep breath.

“Lisa, these are my friends. And they’re really awesome people. Did you see Chelsea’s defense out there? And Lee’s goal-keeping? We just played a great game and we’re going out for ice cream. You’re welcome to join us.”

Lisa looked surprised. She shrugged her shoulders. “Whatever,” she said.  “We’re getting burgers. Just text me later.” Then she and her friends walked off.

Marisa shook her head. Her sister would always be a little bit difficult, but maybe someday she would understand that “coolness” wasn’t about clothes and bags and shoes. She put one arm around each teammate.

“Let’s go, Hyenas!” she called out, as loud as she could.

What's Right With This Picture?

One point of view: Marisa displays the strength of citizenship. Someone who has a strong sense of citizenship isn’t just simply a member of a group or team. Rather, they work well with fellow group members. They offer support, and they stand up for group members when others are putting them down. Marisa is also loyal and exhibits a great sense of courage.

Although Marisa is hesitant at first to stand up to her sister and her sister’s friends, she eventually realizes that she must support her soccer teammates. She is loyal to them and follows through with her plans to get ice cream after the game, rather than ditching them for a “cooler” plan. She learns to be there for her teammates both on and off the field. This makes her a good citizen or team member that her soccer friends can respect and count on.

Marisa also shows zest in her enthusiasm for soccer. She has found an activity that she genuinely enjoys, and feels passionate and energetic on the soccer field. She is brave to go against what is considered “cool” and “uncool,” and to decide for herself who she wants to be friends with.

What do you think?

1 thought on ““Cool” is in the Eye of the Beholder”